Venus Williams is an American professional tennis player who is a former World No.1, multiple Grand Slam champion and is regarded as one of the greatest female players of all time.

Venus Williams was born in Lynwood, California and began playing tennis at an early age. Her potential was identified by a professional local tennis player when she was seven and her family moved to Florida so she could get proper training three years later. She and younger sister Serena trained at the same academy, but their father took over their training in 1995. Venus accumulated a 63-0 record on the USTA  junior tour, but her father wanted her to take it slow and focus on schoolwork. However, her talent was too great to be denied and she soon turned professional at the age of 14.

Williams first WTA tournament was at the 1994 Bank of the West Classic, where she reached the second round. She was up a set and a break against then-World No.2 Arantxa Sánchez Vicario but ended up losing the match. She would reach the quarterfinals at the same event the following year, defeating World No.18 Amy Frazier in the second round. In 1997, Williams would have her breakthrough on the WTA Tour. She reached her first Grand Slam final at the US Open, losing to Martina Hingis. She became the first unseeded US Open women’s singles finalist since 1958, and finished the year ranked World No.22.

Williams would win her maiden WTA title at the 1998 IGA Tennis Classic in Oklahoma City, followed by a title win at the Miami Open. She would break into the Top 10 for the first time, and reach at least the quarterfinals of all four slams. She won the mixed doubles titles at the Australian Open and French Open, partnering with Justin Gimelstob. Teaming with sister Serena Williams, Venus would win two doubles Grand Slam titles, at the 1999 French Open and the 1999 US Open. She finished the year ranked as World No.3.

The next decade would see Williams dominate the WTA circuit, alongside her sister Serena. Venus would win her maiden Grand Slam title at the 2000 Wimbledon Championships, defeating defending champion Lindsay Davenport in the final. She would go on an incredible 35-match winning streak, that culminated with her second Major title at the US Open. She also won the gold medal at the 2000 Olympic Games in Sydney, in singles and doubles with sister Serena. Venus finished the year ranked No.3 in the world, with six WTA singles titles.

In 2001, Williams would win her third and fourth Grand Slam singles titles, at Wimbledon and the US Open. She defeated sister Serena in the US Open final, this was the first time sisters played each other in a Grand Slam final since 1884. Venus would finally capture the World No.1 position in 2002, becoming the first African-American woman to hold the ranking. She would finish runner-up at all four Grand Slams, and finish the year ranked No.2 in the world.

Following more unsuccessful Major final appearances, Williams would win her fifth Grand Slam title at the 2005 Wimbledon Championships. She defeated top seed Davenport in what many consider to be one of the best Wimbledon finals ever, with Williams prevailing in three tight sets. However, Williams would have an injury-plagued 2006 season that saw her miss several months. She ended the year ranked World No.46, her lowest finish since 1997.

Williams would return to form in 2007, winning her sixth Grand Slam title at Wimbledon. This saw her return to the Top 20, and she would end the year ranked World No.8. She was able to successfully defend her Wimbledon title the following year, defeating sister Serena in the final. The pair would go on to win doubles gold at the 2008 Beijing Olympic Games. Venus would qualify for the year-ending WTA Finals, defeating Vera Zvonareva in the final. She ended the year ranked No.6 with three titles.

Williams would win three doubles Grand Slam titles with sister Serena in 2009, but fail to win any more Major singles titles. Nonetheless, her consistent play would see her hover close to the the Top 5 for the next two years. However, she would be diagnosed with Sjogren’s Syndrome, an energy-sapping autoimmune disease, in 2011. She took time off to receive treatment and her ranking dropped outside the Top 100.

Williams would make several comebacks following her diagnosis, winning her 44th WTA singles title at the 2012 Luxembourg Open. Furthermore, she would win her 13th Grand Slam doubles title with Serena at Wimbledon, and the duo would also claim their third Olympic gold medal together at the 2012 London Olympics.

Williams would win more titles during the 2010’s, while simultaneously dealing with injuries and an autoimmune disease. Some noteworthy titles include victories at the 2014 Dubai championships, the 2015 WTA Elite Trophy and the 2017 Wimbledon doubles title with sister, Serena. She would finish runner-up at the two Grand Slams in 2017, the Australian Open (l. to S.Williams) and Wimbledon (l. to Muguruza). She finished the 2019 season ranked World No.53, making four quarterfinals. However, she would fail to go past the third round of any Grand Slam.

By competing during the 2020 season, Williams set a record as the first player to compete on the WTA Tour in four different decades. She would lose in the first round of the 2020 Australian Open to compatriot Coco Gauff, who was born 10 years after Williams debuted on the WTA Tour.

With 49 singles titles, Williams trails only her sister, Serena among active players on the WTA Tour with most singles titles. She is also an Olympic Gold medalist and Fed Cup winner (1999). She released her first book, Come to Win; on How Sports Can Help You Top Your Profession, in June 2010. She and sister, Serena are also part-owners of an NFL team, the Miami Dolphins. Furthermore, she owns an interior design company called V Starr Interiors.

Read all the latest news about Venus Williams 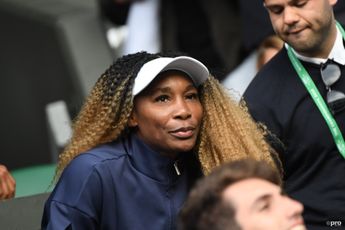 Venus Williams spoke about her dream doubles partner ins a recent interview and the names she picked might surprise you.Venus... 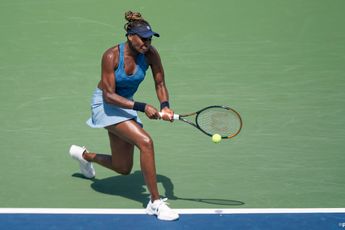 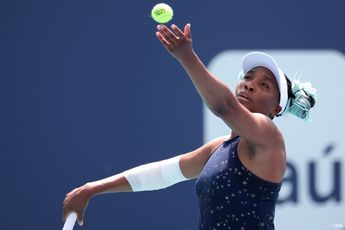 VIDEO: "Life is sports and Sports is life" - Venus Williams partners with Lacoste

Venus Williams is not playing much tennis lately but her brand is tied to tennis and it's only growing with a new partnership... 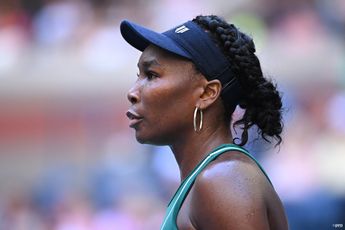 Venus Williams is in favour of athletes peaking about their mental health as she thinks it will be beneficial to people from... 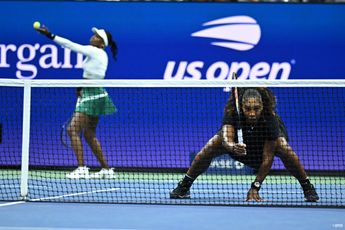 WTA icon Venus Williams recently opened up on social media about adjusting to Serena Williams'' departure from the tennis wor...

WTA icon Venus Williams made a surprise appearance at the University of Washington (UW) in Seattle.Williams could be seen on... 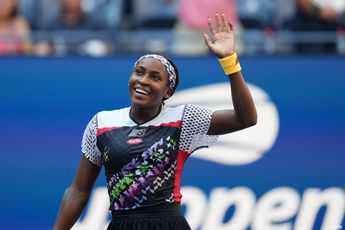 The U.S. Open began as a farewell party for Serena Williams and ended with proof of her legacy for Black athletes, USTA playe... 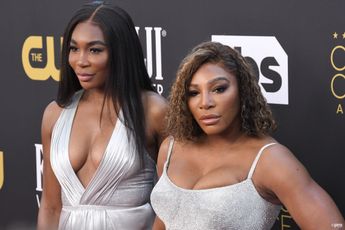 Venus Williams and Serena Williams share a total of 30 singles Grand Slam trophies between the duo. While their accomplishmen...

Coco Gauff looks back on the US Open impressed with her performances: "I'm super proud"

Coco Gauff made it to the quarter finals of this years US Open. Gauff beat Leolia Jeanjean, Elena-Gabriela Ruse, fellow Ameri...