Fabio Fognini is an Italian professional tennis player who is most successful on clay and is also a men’s doubles Grand Slam champion.

Fabio Fognini was born in Sanremo, Italy and began playing tennis at the age of four. His father, Fulvio, owned his own company while his mother, Silvana, was a housewife. Fognini achieved a ranking of World No.8 as a junior in May 2004, and reached the quarterfinals of that year’s boys Australian Open and French Open.

Fognini participated on the Future’s tour from 2004-2005, winning two titles before qualifying for his first ATP Challenger event at Palermo. He made his ATP maid draw debut at the 2006 ATP Buenos Aires event, losing to eventual champion Carlos Moya in the first round. He qualified for five ATP tournaments in 2007, defeating Andy Murray at the 2007 Rogers Cup before losing to Roger Federer in the third round. He entered the Top 100 for the first time, ending the year ranked World No.94.

After some strong performances on clay in early 2008, the Italian would reach the semifinals of both the Warsaw Open and the Umag Open. He defeated former World No.1 Carlos Moya in the quarterfinals at Umag, before losing to eventual champion Fernando Verdasco. He would win two Challenger titles before having season-ending surgery on his left knee in October. He would return in the 2009 season, winning a then career-best 20 matches. This included a semifinal showing at the Stuttgart Open, where he upset World No.11 Nikolay Davydenko before losing to Victor Hanescu. He would finish the 2010 season  ranked in the Top 60, after reaching the third round at that year’s French Open.

Fognini reached the quarterfinals of a Grand Slam for the first time at the 2011 French Open, becoming the first Italian man to do so since 1995. He reached a career-high of World No.32 in June and compiled a 19-13 record on clay. He won his first doubles ATP title at Umag, pairing with compatriot Simone Bolelli. The duo would also reach the semifinals of the 2011 US Open in the men’s doubles event.

The Italian finally reached his first career ATP singles final at Bucharest in 2012, losing to Gilles Simon. He would also reach the final of the St. Petersburg Open, but lose to Martin Klizan. However, he finished the year ranked in the Top 50 and highlighted his season with a third-round appearance at the US Open (l. to Andy Roddick). He would win his maiden ATP singles title the following year, defeating Philipp Kohlschreiber in the 2013 Stuttgart final. He followed this up with another title at Hamburg, battling past qualifier Federico Delbonis in the final. He achieved a 13-match winning streak that was ended by Tommy Robredo in the final of the Umag Open. Nonetheless, he saw his ranking rise from No.31 to No.16 in just three weeks. He would finish the year ranked inside the Top 20, becoming the first Italian man to do so since Corrado Barazzutti in 1978.

Fognini won his third career ATP title in 2014, defeating Leonardo Mayer in the final of the Chile Open. Following a strong clay-court season, he would reach a then career-high of World No.14. He also led Italy to the Davis Cup semifinals for the first time since 1998, defeating Great Britain’s Andy Murray in a vital rubber match. He would finish the season in the Top 20 for the second consecutive year.

The 2015 season saw Fognini record three wins over Spaniard Rafael Nadal, with the first coming in the semifinals of the Rio Open. He would also defeat Nadal in the third round of the Barcelona Open, with his final victory coming in the third round of the 2015 US Open. In that match, he came back from bein down two sets to upset the Spaniard in five sets. This was the first time that Nadal had lost a Grand Slam match after leading by two sets to none. Furthermore, he teamed with compatriot Bolelli to win the 2015 men’s doubles Australian Open trophy. This was the first time an all-Italian men’s team had won a doubles Major in the Open Era. Fognini ended the season ranked in the Top 25, and he even rose to World No.7 in the ATP doubles rankings.

Fognini captured his fourth ATP singles title at the 2016 Croatia Open in Umag, establishing himself as a clay-court specialist. He also competed in the 2016 Rio Olympics, losing to defending champion Andy Murray in the third round. The following season saw him win another ATP title, defeating German qualifier Yannick Hanfmann in the Gstaad final. He earned the biggest win of his career when he finally defeated World No.1 Andy Murray in the second round of the Rome Masters. He also reached the semifinals of the Miami Masters but lost to Nadal in straight sets. After a first round loss at the 2017 US Open, he was fined $96,000 and provisionally suspended for two Grand Slams for using misogynistic language towards the female umpire. The ban would be lifted if he maintained good behavior through the 2019 season.

Fognini would win three titles in 2018, at Sao Paulo (d. Jarry), Bastad (d. Gasquet) and Los Cabos (d. Del Potro). He would reach the final of the Chengdu Open (l. to Tomic) and withdraw due to an ankle injury in the semifinals at Beijing. Following his best year on the ATP circuit, Fognini would end the season ranked at a then career-high of World No.13.

During the 2019 season, Fognini entered the Monte Carlo Masters on a five-match losing streak. However, he put together a string of good performances to reach the final and defeat Serbian Dusan Lajovic for his first Masters trophy. En route to the title, he upset World No.3 Alexander Zverev and World No.2 Rafael Nadal, who was also the two-time defending champion. He became the first Italian man to win a Masters 1000 title and followed this up by breaking into the Top 10 for the first time in his career. At 32 years of age, he was also the oldest man to reach the Top 10 for the first time, as he rose to a career-high ranking of World No.9.

Fognini represented Team Italy at the inaugural ATP Cup, going 1-2 at the event. He reached the fourth round of the 2020 Australian Open (l. to Sandgren) but withdrew from Marseille citing a calf injury. Fognini underwent arthroscopic surgery on both ankles on May 30 2020, as the season was suspended due to the coronavirus pandemic.

Fognini is married to retired WTA professional Flavia Pennetta, who won the women’s singles US Open title in 2015. The couple wed in June 2016, and have two children; Federico, born in May 2017 and Farah, born in December 2019.

Read all the latest news about Fabio Fognini 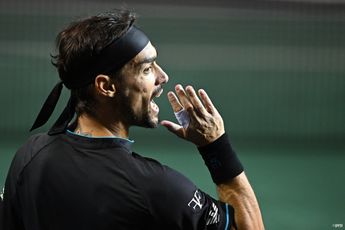 Fabio Fognini and Simone Bolelli delivered a huge win for Italy beating Sock and Paul 6-4 6-4 in the doubles to lift the nati...

Fognini fully behind ATP Next Gen Finals idea: "It’s quite important to have these kind of events"

Fabio Fognini likes Italy hosting the Next Gen ATP Finals but it's important to have Italians competing at the event.This yea... 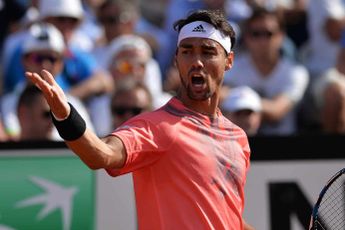 No event created so much controversy as the Napoli Cup this week with issues continuing to plague the event that is staging q... 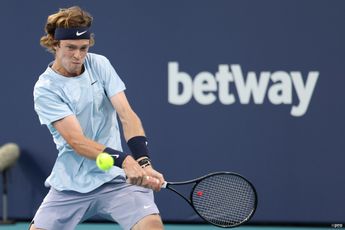 The 2022 tennis event in Naples is a new event created for this year's ATP calendar from the 250 series and it will be headli... 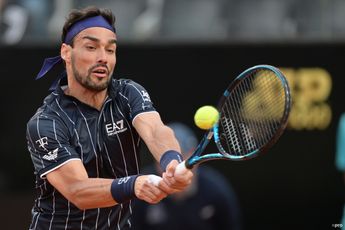 Fabio Fognini asked the umpire to give him a code violation for ball abuse after he double-faulted in his match against Vukic... 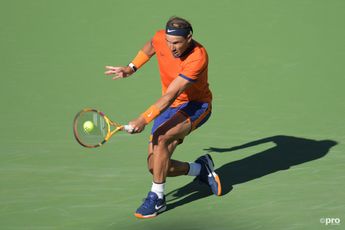 Four-time champion Rafael Nadal overcame Fabio Fognini and an unfortunate incident with his racket, to advance to the third r... 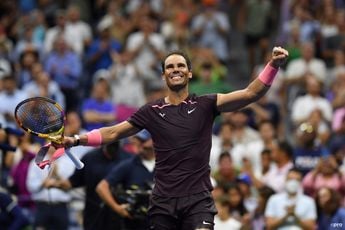 Four-time champion Rafael Nadal was made to work in his first round match at the US Open, fighting past Australian Rinky Hiji... 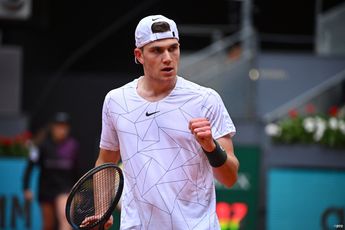 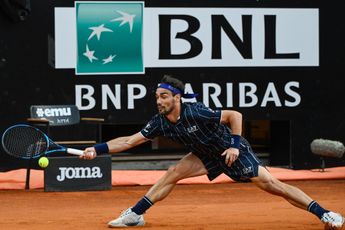 "Try and enjoy it" - Fognini's goals as retirement nears

35-year-old Fabio Fognini understands that his retirement is getting closer and his goal is just to try and enjoy it as much... 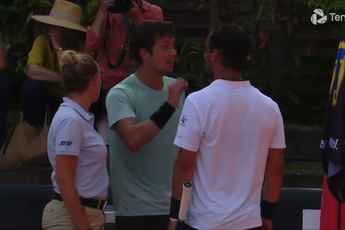 Fabio Fognini and Aljez Bedene played many times before and it seems like there were some feelings involved there from the pa...